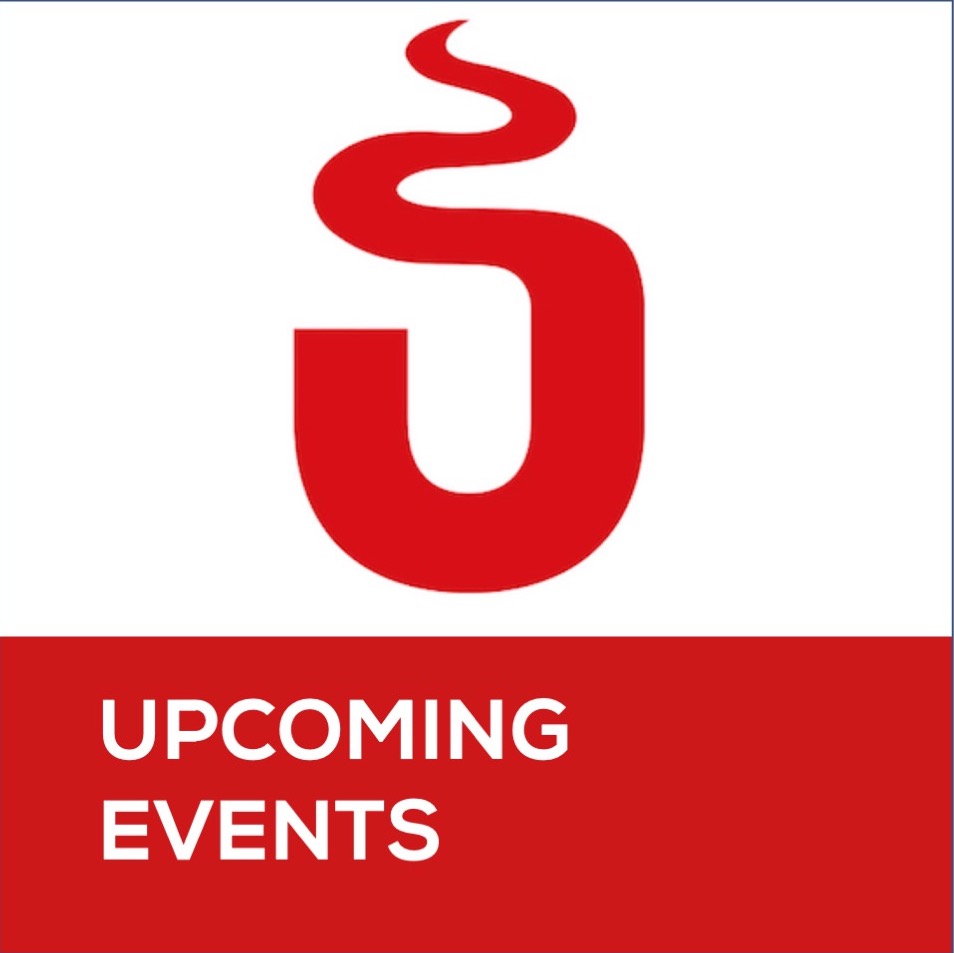 Call for papers and registration here.

Call for papers and registration here. 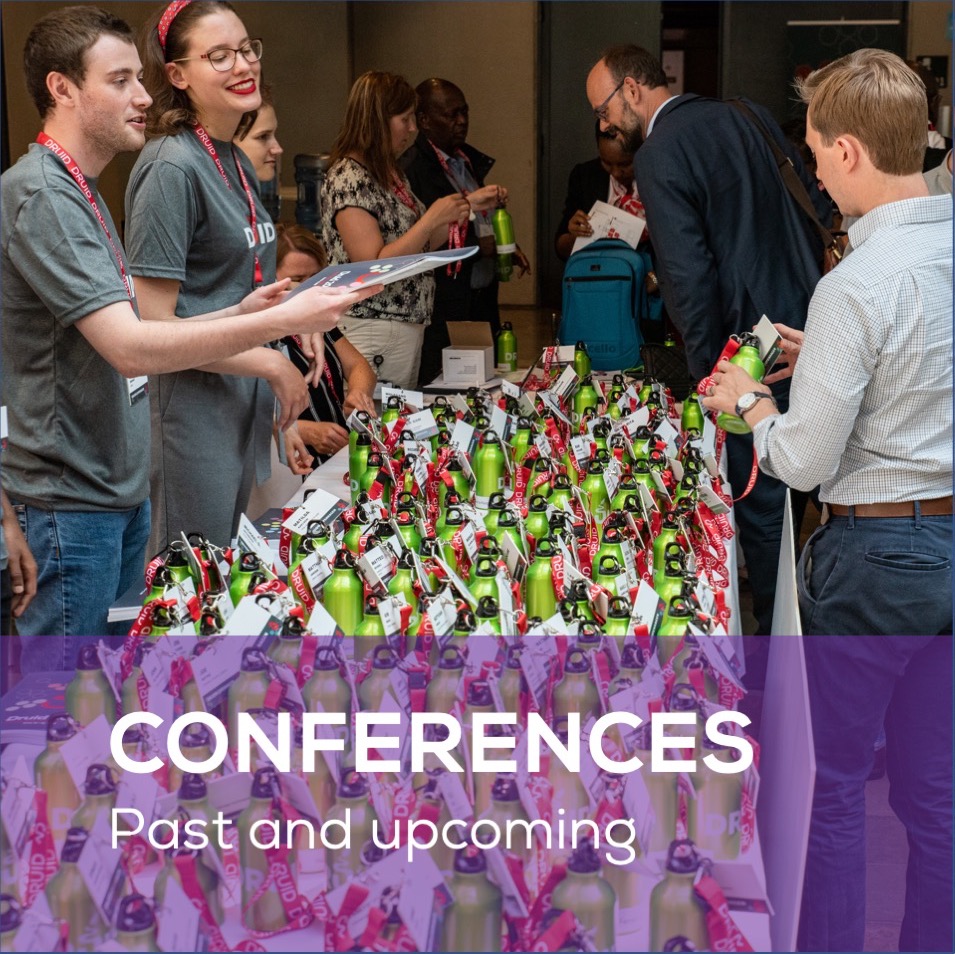 For programs and papers, select the individual conference. You can also see DRUID award winners, hi-res videos of DRUID Debates and keynotes, as well as photos from all conferences.

For programs and papers, select the individual conference. You can also see DRUID award winners, hi-res videos of DRUID Debates and keynotes, as well as photos from all conferences. 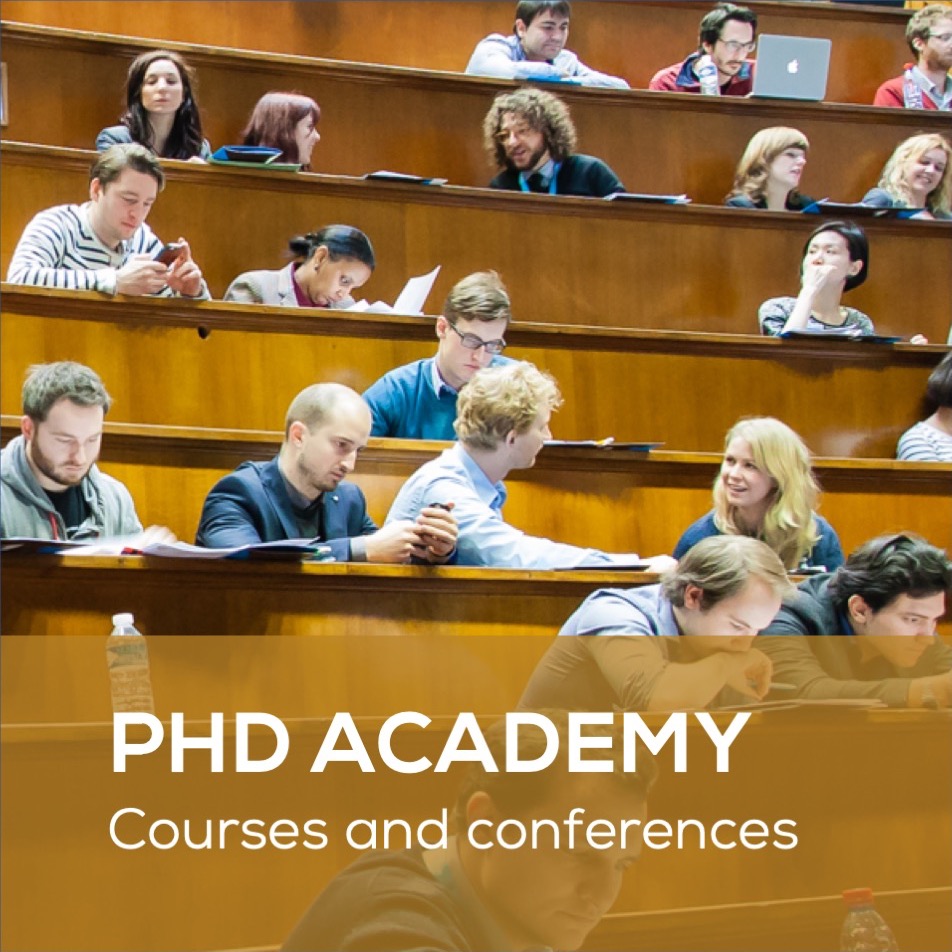 For programs and papers, select the individual Academy event/course. You can also see DRUID award winners as well as photos from all Academy events. 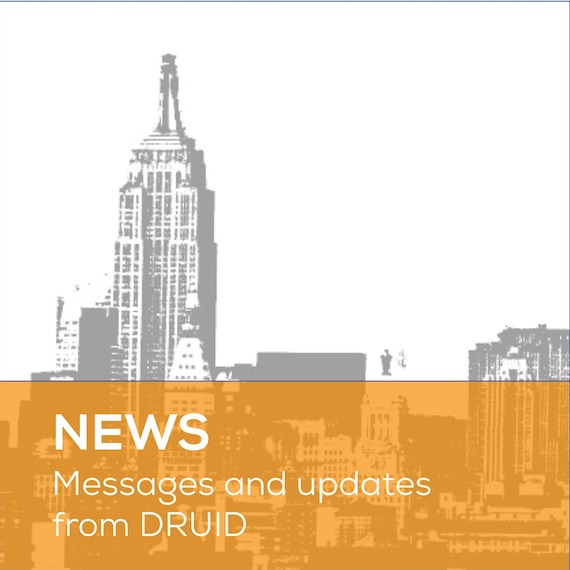 THE NEXT DRUID CONFERENCE IS DRUID22, June 13-15, Copenhagen

The next DRUID event, the DRUID22 conference, is on track. Paper deadline: March 1.
Please see the conference page: DRUID22 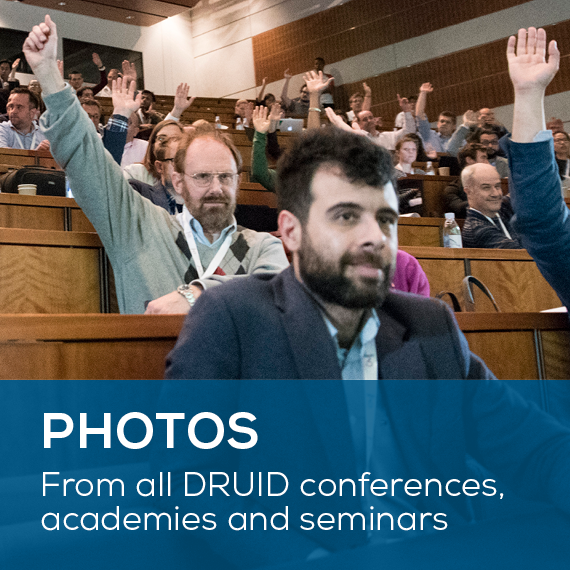 See all photos from the DRUID conferences. 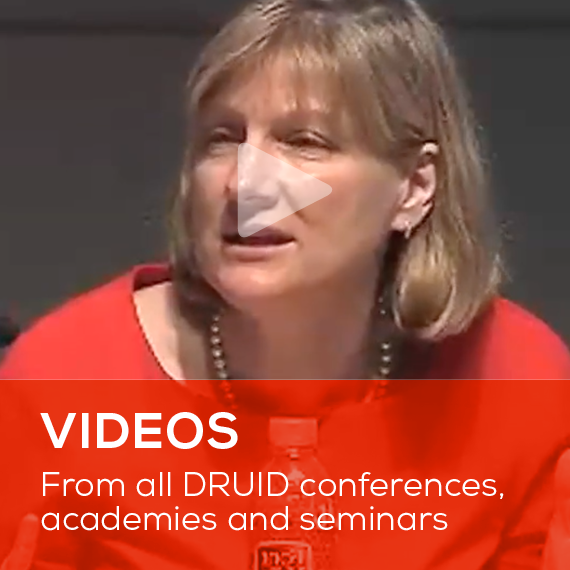 See the most recent DRUID keynotes and debates in hi-res video. 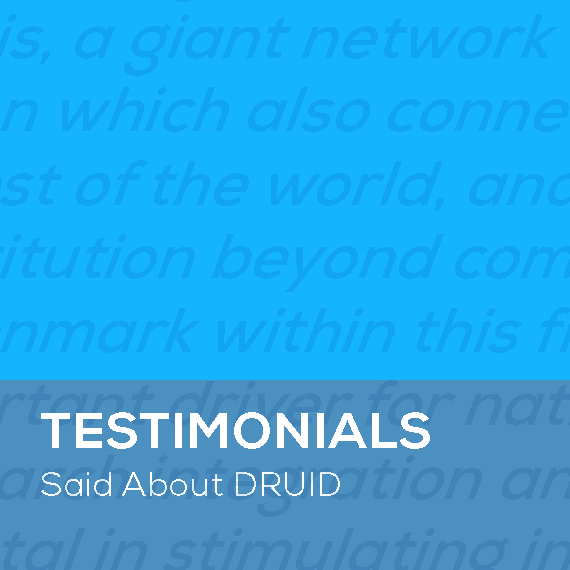 “A melting pot. It has been, and still is, a giant network for innovation which also connects to the rest of the world, and it is an institution beyond compare in Denmark within this field. An important driver for national research integration and instrumental in stimulating interaction among the cognitive networks that relate in different ways to innovation research”.
Danish Ministry of Higher Education and Science, 2015

“New thinking and understanding is very much needed on the behavior of firms and industries in today’s rapidly changing economy, and the challenges for public policy. The meetings of DRUID have been and will continue to be one of the most supportive loci for such new thinking.”
Richard Nelson, Columbia University, 2015

“DRUID has become an exceptionally valuable well-regarded node in the global network of scholars concerned with innovation, technical change, and related issues of policy and organization.  I have been a regular attendee at the Summer conferences and an occasional participant in the Winter conferences for PhDs. It has been a pleasure to participate as the conferences advanced in every dimension, including intellectual stimulation, research interactions, organization, and opportunities for interaction with scholars from around the world.”
Sidney G. Winter, The Wharton School, University of Pennsylvania, 2015

“The DRUID conferences have now become the preeminent international venue for presenting leading research on innovation and industrial dynamics.  In serving this purpose, DRUID also has come to serve as a critical facilitator in the kinds of intellectual exchanges, discussions and debates that advance knowledge and thinking in this terribly important research domain.”
Wes Cohen, Duke University, 2015

“DRUID has become a terribly important catalyst for research efforts in a broad range of areas, including studies of innovation, entrepreneurship, management, industry dynamics, and economic geography.  DRUID plays this role most prominently with respect to its major annual conference, but also via its doctoral student and junior faculty development workshops.  There is not really a parallel to the DRUID conference as it simultaneously has tremendous scale of activity, but at the same time a rather tight topical focus.”
Daniel A. Levinthal, The Wharton School, University of Pennsylvania, 2015

“I am a big DRUID fan!! DRUID conferences have long served as a very important venue for academic exchanges on topics at the leading edge of innovation research.”
Eric von Hippel, MIT, 2015

“DRUID as an organization, and especially the summer conference, serves as a critical nexus for European and North American scholars interested in entrepreneurship, innovation, industry evolution, and economic geography. DRUID has played an important role in advancing research on these topics by creating connections across related disciplines. I find the DRUID community welcoming and unusually stimulating intellectually. Many North American scholars hold DRUID in similarly high regard.”
Olav Sorenson, Yale University, 2015

“I think it would be fair to say that increasingly among the elite schools globally DRUID is regarded as the equivalent of the Academy of Management in the European context and many US and Asia based scholars, if they pick a European conference to attend, it is DRUID.”
Gautam Ahuja, University of Michigan

“I would like to make a strong endorsement for DRUID as a leading institution and event with significant visibility and recognition in the international community of strategy and innovation scholars.  DRUID is one of the leading event for many of us, because of the widespread set of scholars, the high-quality level of its symposia and debates, and several other related matters.”
Alfonso Gambardella, Bocconi University, 2015

“DRUID is unique in incubating interdisciplinary and multidisciplinary topics. DRUID’s focus on industrial dynamics is a significant topic, which has the ability to evolve and redefine as conditions change. When I attend the summer conference I always learn new concepts and see original ideas.  The winter conference provides an opportunity for younger scholars to get small group feedback on their work.”
Maryann Feldman, University of North Carolina, 2015

“The kinds of presentations one hears at DRUID are unique on the international stage, with its blend of economists, industrial economists, management studies professors, and strategy people. It is a great place to meet people interested in questions of organizational learning and process, and I particularly find attention to mechanisms refreshing in a field that otherwise spends a lot of time on descriptive results.”
Howard E. Aldrich, University of North Carolina, Chapel Hill, 2015

“In an era of sound bites, bubbles and fashionable trends in academia as in the rest of the world, DRUID stands out in its thoughtful, contemplative, yet relevant approach to some of the most urgent topics, issues and fields of our time. It has become the gold standard for bringing together a broad spectrum of scholars, spanning a number of diverse academic backgrounds for meaningful and thoughtful conversations.”
David Audretsch, Indiana University, 2015

“DRUID has been a vital gathering place for the study of industrial dynamics, innovation, and management since its inception 20 years ago.  Some of the best scholars in these fields have attended and debated at DRUID meetings, resulting in a wonderful intellectual community that is worthy of continued support.”
Henry Chesbrough, UC Berkeley, 2015

“DRUID has been the most successful European research organization in business and management or the past two decades. It has acted not only as a source of valuable research, but even more important as forum for scholars of business and social sciences from across the globe–both junior researchers and established leaders in their fields. Most important, DRUID has done a remarkable job of encouraging the interchange of ideas across different fields through a focus on important current phenomenon.”
Robert Grant, Bocconi University, 2015

“DRUID has become one of the go-to networks and conference events where North American scholars meet their European counterparts in a sustained trans-Atlantic dialogue on innovation and innovation policy.  It is an essential bridge between the two continents. DRUID has been the key international and interdisciplinary forum for scholarship on innovation for 20 years now.  DRUID is unique in its combination of scholarly rigor, policy relevance and the building of bridges between economics, business, organizational studies, geography and sociology for a comprehensive and border-crossing look at the rapidly-moving world of innovation.”
Michael Storper, UCLA and LSE

“From its inception 25 years ago, DRUID has grown to be the go-to conference for innovation and entrepreneurship scholars from a range of disciplines, especially from my field of urbanism and economic geography. DRUID has impact, it has helped to develop and shape an important field not just for academia but for creating more innovative economies and more prosperous societies.”
Richard Florida, University of Toronto and NYU, 2015

“Thank you for the continued excellence of the DRUID conference and the service that DRUID provides to the academic and scientific community.  I must say that the consistently high quality, and the hallmark debates make it one of my favorite conferences. Every year’s conference is better than the year before.”
Rajshree Argarwal, University of Maryland, 2015

“DRUID is known as the premiere conference for business and management scholars working at the intersection of innovation, technology, economics, history and management.”
Anita McGahan, University of Toronto, 2015

“DRUID is recognized internationally as one of the premier conferences on innovation and entrepreneurship, attracting leading researchers and experts in these fields year after year.”
Simon C. Parker, Ivey Business School at Western University, 2015

“I have been going to DRUID conferences nearly since its inception.  When I think of the academic leaders such as Dick Nelson, Nate Rosenberg, Sid Winter, Dave Mowery, Charles Edquist, Bengt-Ake Lundvall, and so many more that I met at DRUID and how those connections helped my career, it is difficult to think of another and better conference.”
Martin Kenney, University of California, Davis, 2015

“DRUID has become a leading international community and conference in the area of innovation management and strategy. It is well known on both sides of the Atlantic. Even though it has grown dramatically over the years that I have attended, it retains a unique identity and “personality”. DRUID is always a part of summer I look forward to, both to reconnect with friends and colleagues and hear about their latest work, but also to be stimulated by the always-topical debates. DRUID is never boring, which cannot be said of most academic conferences. Indeed, from my viewpoint, DRUID is the top European management conference.”
Aija Leiponen, Cornell University, 2015

“DRUID is the preeminent innovation conference in all of Europe. I think the fact that it has the top names in the field in attendance is an indication of its importance for the profession.”
David Robinson, Duke University and NBER, 2015

“DRUID has become one of the most important international gatherings of scholars concerned with industrial dynamics, innovation and entrepreneurship. Its unique blend of debates, critical and detailed discussions of new research, and its capacity-building efforts for early career scholars have encouraged not only the formation of a richer and broader academic community, but it has also lifted the research ambitions of that community.”
Ammon Salter, University of Bath, 2015 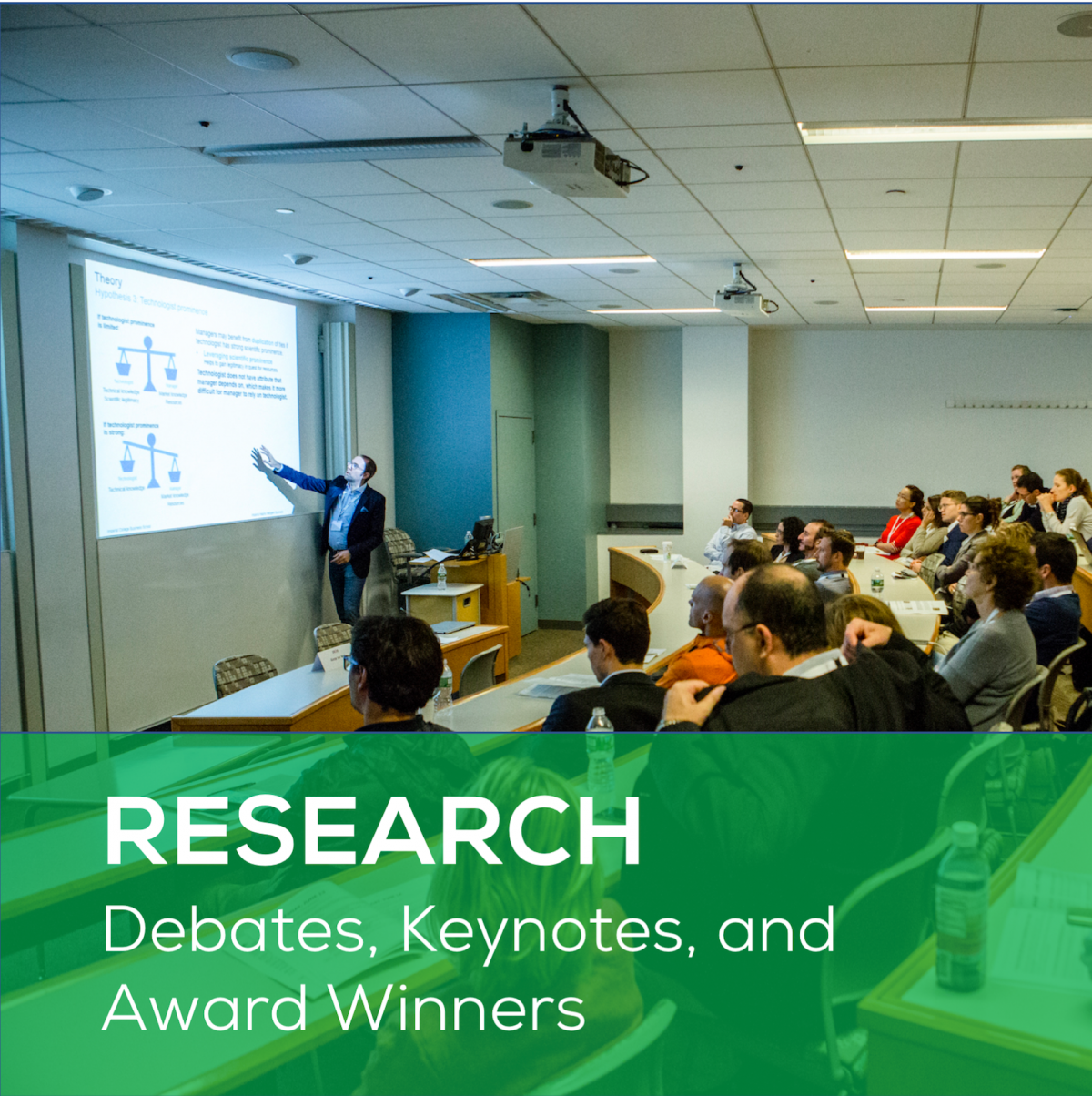 The mission of DRUID is to establish itself as a hub for premier research and doctoral education in innovation and the dynamics of structural, institutional and geographic change.

DRUIDs research agenda is a better understanding of the institutional and organizational dynamics of change, at all levels of analysis: Individuals, teams, firms, projects, networks, industries and national and regional economies. DRUID research is cross-disciplinary, incorporating insights from, for example, economics, sociology, management, and economic geography.

Examples of DRUID research can be found below.

DRUID DEBATES 1995-2022
Outstanding scholars exchanging opinions on key themes in a heated and entertaining setting with conference audiences opposing or supporting their standpoints. 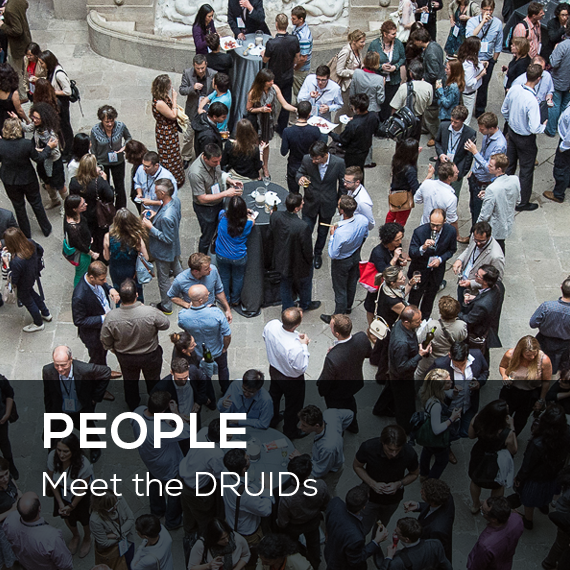